Some 2,000 Jews visited the Old City of Jerusalem’s Temple Mount on Sunday morning to mark the Jewish day of mourning Tisha B’Av, which commemorates the destruction of the two Jewish temples, amid deadly fighting between Israel and the Palestinian Islamic Jihad terror group in the Gaza Strip.

Among the pilgrims was firebrand far-right Knesset member Itamar Ben Gvir who regularly makes highly publicized trips to the holy site at times of heightened tensions, in what is widely seen as a deliberately provocative gesture.

Many Jews traditionally visit the Western Wall and Jerusalem’s Old City on Tisha B’Av, a fast day that began on Saturday night and lasts through Sunday evening, in order to mourn the destruction of the two temples in 586 BCE and 70 CE, respectively. On Tisha B’Av, the Book of Lamentations is traditionally read, along with a number of mournful poems and songs known as Kinot.

As fighting broke out on Friday, ahead of the Jerusalem-focused day of mourning, Israeli analysts raised concerns that large numbers of Jewish visitors to the Temple Mount could further exacerbate the situation at the flashpoint Jerusalem holy site.

Despite these fears, the pilgrimages to the Temple Mount on Sunday morning passed with relatively few incidents.

According to the police, a handful of Jewish visitors were detained and removed from the holy site for violating the terms of the visit — namely by prostrating themselves on the ground and loudly praying, which is forbidden for Jewish visitors to the site.

Jews visit the Temple Mount on the Tisha B’Av day of mourning on August 7, 2022. (Israel Police)

In addition, a number of Muslim visitors were detained and removed for “disturbing the peace, being provocative, making inciting remarks and unsuccessfully trying to disrupt the legal movement of visitors,” police said.

Footage from the scene released by Ben Gvir’s spokesperson showed some Palestinians at the flashpoint site heckling the lawmaker, yelling “Allahu akbar” and “slaughter the Jew” in Arabic. Ben Gvir is seen in the video responding “Am Yisrael Chai,” or “long live the Jewish people.”

Police said officers broke up a number of other clashes between Jews and Muslims in the Old City of Jerusalem throughout Sunday morning. In one case, two East Jerusalem men allegedly pepper-sprayed a group of Jews visiting the Old City. The two suspects were arrested and brought before a court to keep them in custody, police said.

Tens of thousands of Jews visited the Western Wall in the Old City of Jerusalem on Sunday morning for Tisha B’Av. Similar numbers visited the site on Saturday night as well. Although large crowds streamed to the site in Sunday’s early morning hours, by mid-day the plaza was largely empty, due to a combination of intense August heat on the fast day and safety concerns in light of the fighting in Gaza. Thousands of Jews visit the Western Wall on the Tisha B’Av day of mourning on August 7, 2022. (Israel Police)

Ben Gvir, who also prayed Saturday evening at the Western Wall, said his visit had been coordinated a week earlier with the Israel Police and the Knesset Guard, insisting that soaring tensions following the launch of Operation Breaking Dawn would not change his plans.

In a statement, the lawmaker said he received a number of death threats ahead of the visit. He said that he hoped the police would take action on the matter, but did not say if he had filed a complaint.

Ben Gvir, an extremist Knesset member from the Religious Zionism party, made his most recent controversial visit to the Temple Mount late in May, on Jerusalem Day.

MK Gaby Lasky of the coalition’s left-wing Meretz party commented on Twitter that Ben Gvir’s visit should be blocked “to prevent an escalation and provocation that could lead to a dangerous explosion [of tensions].”

The Temple Mount is the holiest place for Jews, as the site of the biblical temples, and the compound’s Al-Aqsa Mosque is the third holiest shrine in Islam, turning the area into a major flashpoint in the Israeli-Palestinian conflict. The site is administered by the Waqf, a religious trust run and funded by Jordan.

Under an increasingly frayed arrangement known as the status quo, Jews are generally allowed to visit the Temple Mount during limited hours and on a brief, predetermined route, but not pray there, perform other acts of worship or carry items related to such worship.

Also stressed to UN envoy @TWennesland at the urgency of preventing any Israeli provocations #AlAqsa tomorrow to avoid further escalation. Historical & legal status quo must be respected. Ending escalation & restoring calm must be a global priority. It is in the interest of all 2/2

Police were deployed in force in Jerusalem, and particularly in the area of ​​the Old City and the Temple Mount, to secure services of the Tisha B’Av fast day amid the flare-up in Gaza.

Public Security Minister Omer Barlev met with top police brass Saturday to discuss preparations, saying “police’s main mission is to maintain calm within the country and to ensure that all emergency instructions in the south are adhered to.”

“Police will also be deployed in points throughout Jerusalem for Tisha B’Av to ensure public safety,” he said. 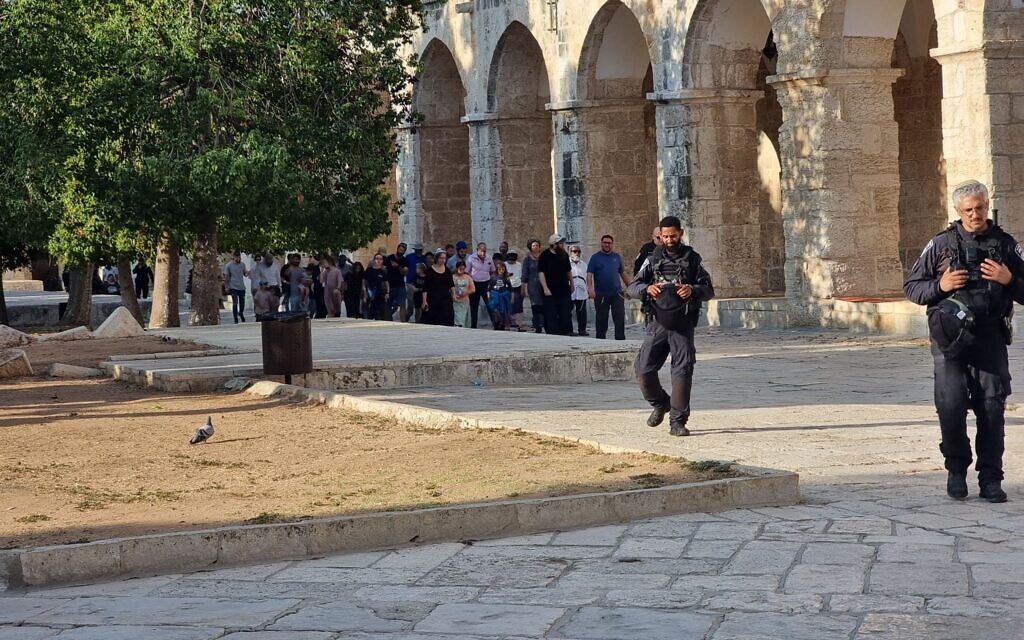 Jews visit the Temple Mount on the Tisha B’Av day of mourning on August 7, 2022. (Israel Police)

Earlier this week, prior to the outbreak of violence in Gaza, a Channel 12 report said political and security decision-makers were concerned about violence on the Temple Mount during the fast day. Previous Tisha B’Avs have seen over 1,000 Jewish pilgrims visiting the flashpoint site that has been at the center of repeated rounds of Israeli-Palestinian violence in recent months and years.

The uptick in Jewish visitors has not just taken place on Tisha B’Av but throughout the entire year, as public opinion has shifted — particularly in the national religious camp — in support of the practice.

Visits by Jews have also increasingly featured prayers — sometimes in a quorum, but more often by individuals. Such conduct used to be prohibited by Israel Police accompanying Jewish visitors through the site, but footage in recent years has shown officers allowing the often quiet prayers to continue in what Palestinians claim has demonstrated a further deterioration of the status quo.