Cardi B seemed happy after her superstar pal Beyonce sent her a gift.

The Grammy-winning rapper held up an autographed copy of the singer’s most recent album which showed Beyonce on a glass horse while in a cowgirl outfit.

A legendary gift: Cardi B was all smiles as her superstar pal Beyoncé sent her a unique gift. The Grammy-winning rapper shared the beautiful gift with fans on her story, simply captioning ‘Thank you @beyonce’ [happy tear emoji]

The Dreamgirl actress and singer wrote a sweet message to Cardi B on the front of the image, as the rapper showcased the message in her story.

It was almost impossible to read the note.

Cardi had on a red plaid robe with her long French manicured nails flashing.

She also had her hair back and was in makeup.

This is not Bey’s first gift to Cardi; in 2020 Beyonce gave her pal a closet full of Ivy Park clothing. 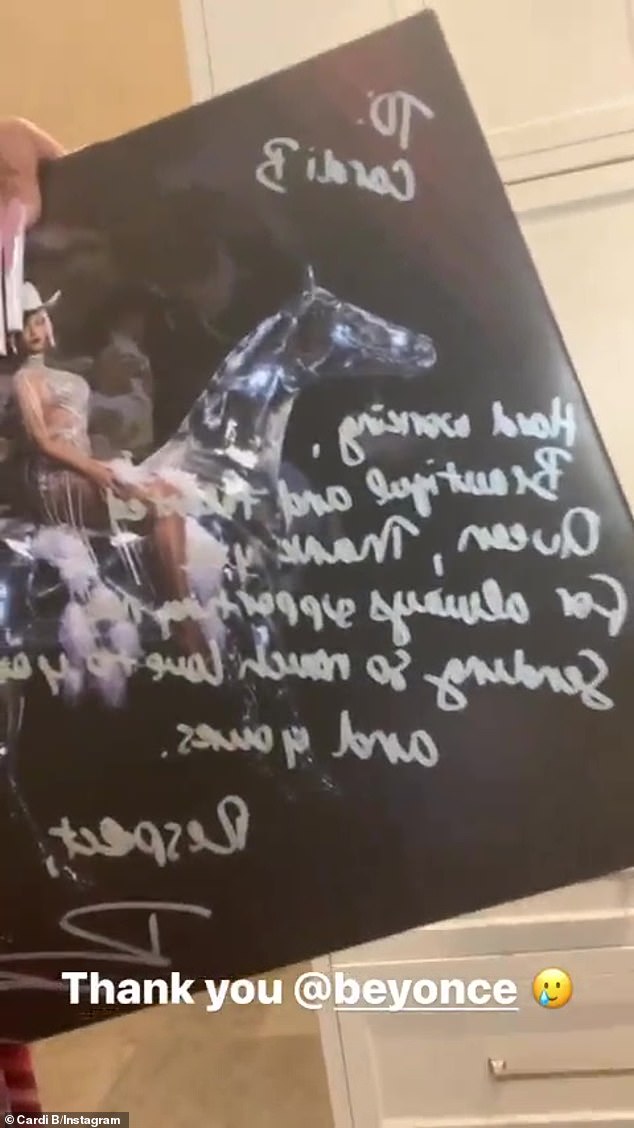 Thanks: The Dreamgirl actress and singer wrote a sweet message to Cardi B on the front of the image, as the rapper showcased the message in her story. Cardi had on a red plaid robe with her long French manicured nails flashing

Cardi has had a tough month.

She has been sentenced to over two weeks of community service after pleading guilty to two misdemeanors on Thursday (Sept. 15) in a Queens, NY courtroom.

The 29-year-old rapper, born Belcalis Almanzar, was originally indicted on two felonies and 12 charges, including harassment, criminal solicitation, and conspiracy. The Bronx sensation has faced one count of third-degree assault and one count of second-degree reckless endangerment, for two separate incidents at Angels Strip Club in 2018. The other 10 counts were dismissed. 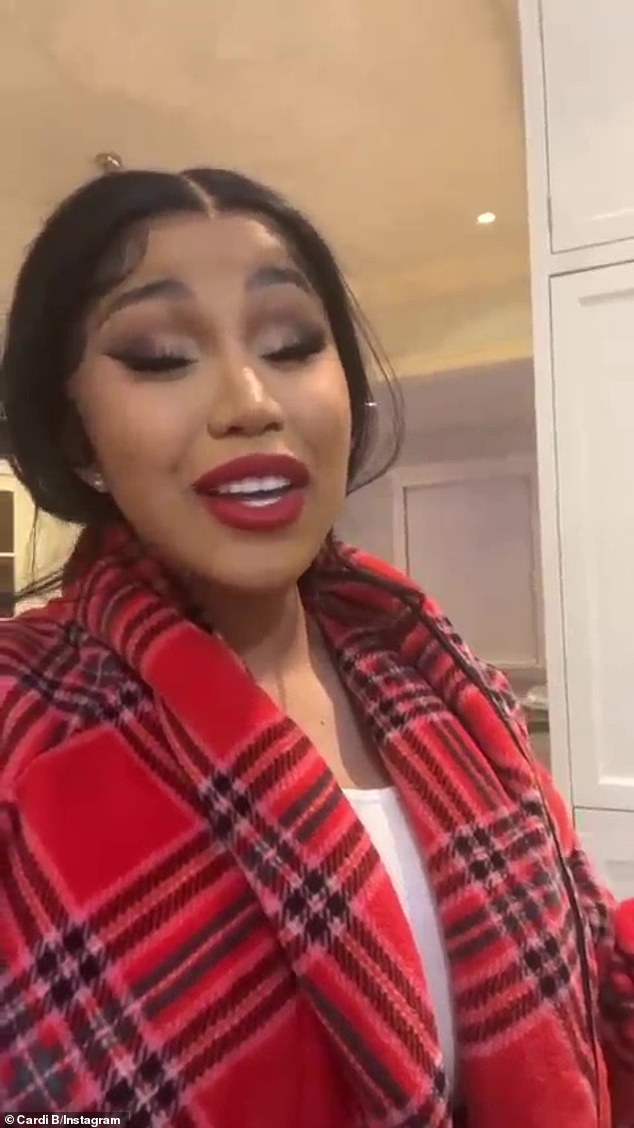 They are pals: Cardi seemed thrilled that the superstar sent her a personalized gift 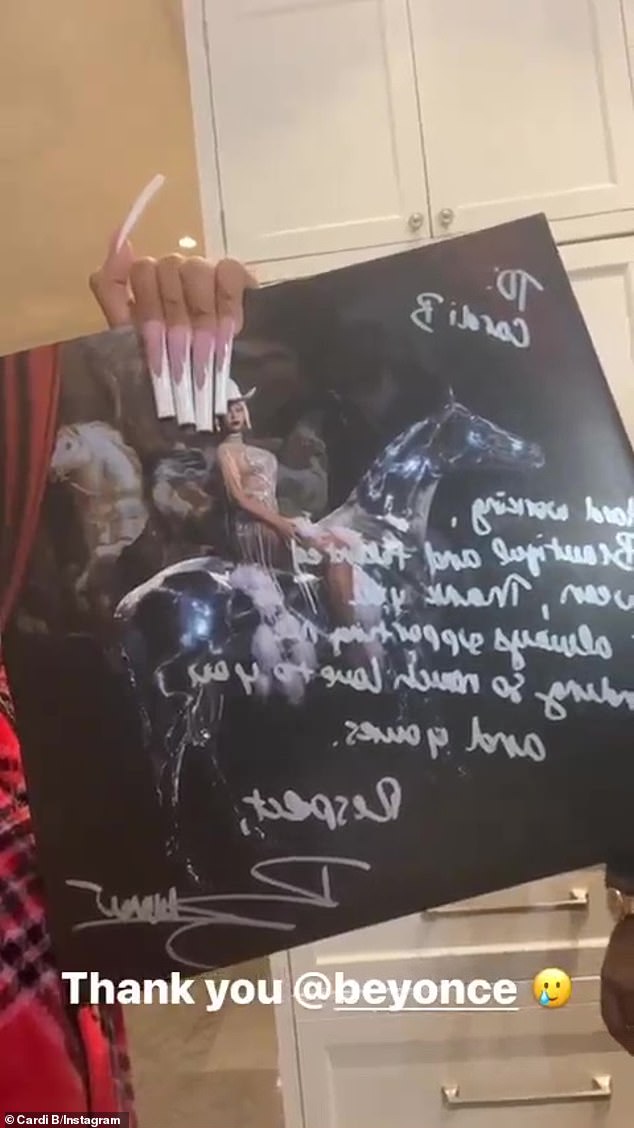 What does it say? It was not easy to read the note that was signed by Beyonce

Almanzar admitted to orchestrating and participating in the attacks on two employees of the establishment located in Flushing, NY. The Bronx star offered $5,000 to an associate on Instagram to assist her in confronting the nightclub bartenders. According to authorities, the victims (who are also sisters) were allegedly romantically involved with Cardi’s husband and Migos member Offset.

After prosecutors reached the decision, Cardi B agreed to a sentence of 15 days of community service, paired with a three-year order of protection for the victims.

“Part of growing up and maturing is being accountable for your actions,” she expressed in a statement delivered by a representative at the hearing. ‘As a mother, it’s a practice that I am trying to instill in my children, but the example starts with me.’

She added, ‘I’ve made some bad decisions in my past that I am not afraid to face and own up to. These moments don’t define me, and they are not reflective of who I am now. I’m looking forward to moving past this situation with my family and friends and getting back to the things I love the most — the music and my fans.’

Cardi B and rapper Offset have been married since 2017. They have two children together, 4-year-old daughter Kulture and 1-year-old son Wave.

The rapper recently opened up about the challenge of giving his wife gifts. 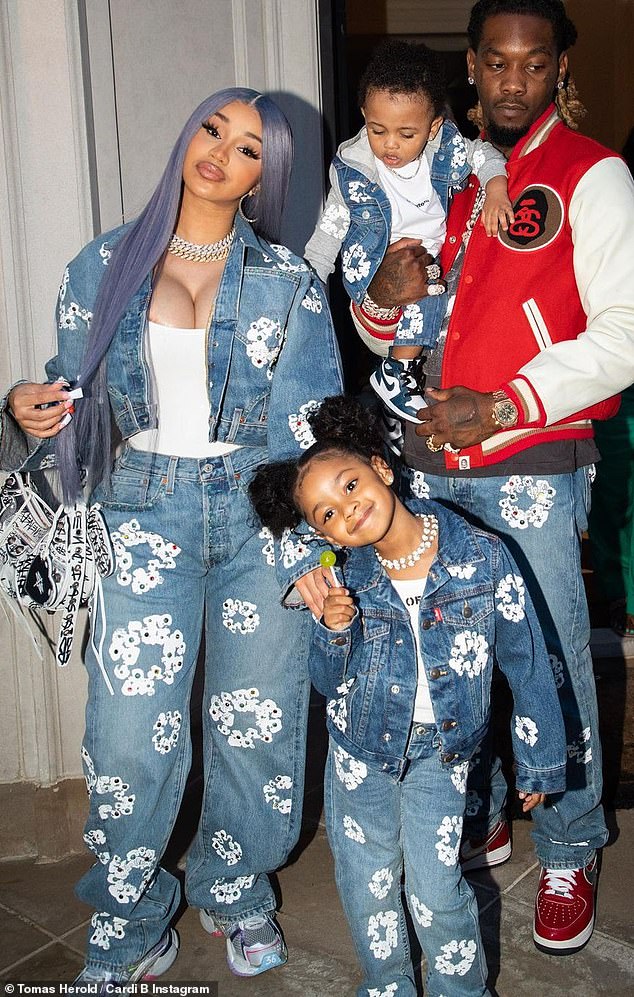 Family first: Cardi B and rapper Offset have been married since 2017. They have two children together, 4-year-old daughter Kulture and 1-year-old son Wave

‘These are the hard times,’ Offset joked to E News. ‘First off, she has everything. Second off, she doesn’t want anything. Third off, I’m gonna get her something because she deserves it. It’s getting harder and harder.’

‘I’m trying to move her towards gifts — that’s why I bought her a home last year because they mean more or last more and it’s a great investment,’ the ‘54321’ rapper continued. ‘Made a lot of money from the houses we’ve got now, and it’s like, I’m trying to stay at that angle. But it’s hard. Like for Christmas, we buy the kids and family stuff — we don’t always get on each other.’

And while it might be a bit of a struggle to find gifts for Cardi, Offset recently explained during an appearance on The Tonight Show that the couple has no issue when it comes to showering their children with over-the-top celebrations.

‘We do it big for our kids,’ he told Jimmy Fallon after sharing a video of Wave on his recent first birthday driving a new miniature car at his lavish birthday party. ‘We love our kids. At the end of the day, we went through life and we didn’t have the opportunities.’