Some 17 months after she was widowed, the Queen’s final journey was to her resting place at St. George’s Chapel at Windsor Castle, to lie with her beloved husband Philip.

But she was not alone as her coffin made the journey from London in the state hearse, with tens of thousands of mourners lining the 25-mile route from Wellington Arch to Berkshire to pay their last respects to the late monarch.

As the Queen’s hearse drove off, flowers were thrown into the road by members of the public watching from behind barriers – something which continued almost all the way to Windsor. When the hearse arrived, it was covered in stems.

The images brought back memories of Princess Diana’s funeral 25 years ago. The vehicle transporting her coffin from London to her resting place at Althorp, Northamptonshire, also arrived covered in flowers.

Yesterday, mourners stood on bollards, railings and camping chairs and sat on each other’s shoulders to see the hearse go down. 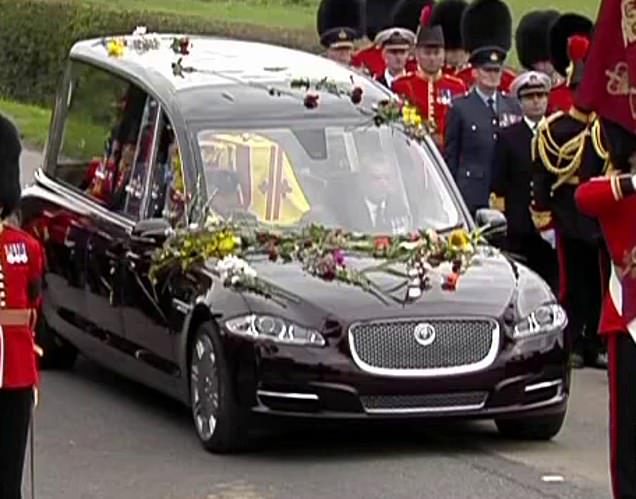 As the Queen’s hearse drove off, flowers were thrown into the road by members of the public watching from behind barriers. When the hearse arrived, it was covered in stems (right). The images brought back memories of Princess Diana’s funeral 25 years ago (left)

Enid Read, 80, and her daughter Ellen Read, 43, who live in Morecambe, Lancashire, waited patiently to see the Queen’s coffin.

Mrs Read, who was alive throughout the Queen’s reign, first saw her when she was six as the then Princess Elizabeth rode towards the Horse Guards Parade in London.

‘The crowd pushed me through to the front as I was only little so I got a good look at her. I saw her again when I was 15 at St Auburn’s Cathedral and again in Aberdeen in 1997,’ she added. ‘She was so lovely and such a good example because she represented kindness and empathy and it would make us proud to know she was representing the country.’

Accountant Adam Djibo, 46, traveled from Aylesbury, Buckinghamshire, with his wife, NHS worker Aicha, 42, and their three children early yesterday morning and were standing opposite the Household Mounted Cavalry Regiment building by Hyde Park at 8am.

Mr Djibo said: ‘The Queen has been a constant presence in our lives and a real role model to look up to. I am 46 and even for my parents she has always been there as the figurehead for Britain, representing many different generations and communities.’ 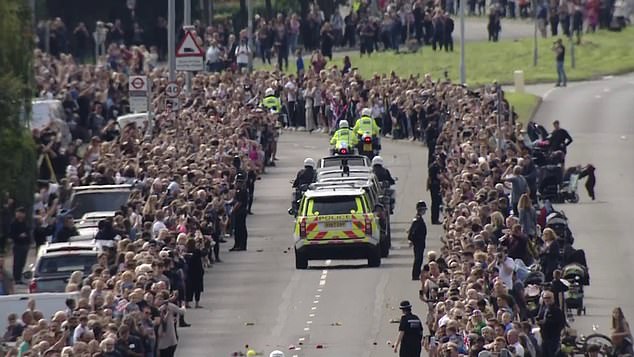 Tens of thousands of mourners watched as the Queen’s coffin traveled 25 miles from Wellington Arch in London to Windsor Castle, where the monarch was buried beside her beloved husband

Mrs. Moth spent 21 years in the Navy and served in Afghanistan in 2006, while Mrs. Reynolds served for 14 years in the Army, including a tour of Iraq in 1991.

Mrs Moth said: ‘We both served for a long time so felt this connection and that it was only right that we came to pay our respects.

‘I’m only small so it’s been a bit of a challenge finding somewhere I’ll be able to see – I’ve perched myself on this kerb for a couple of extra inches.’

The grueling job of guarding the funeral procession faced by thousands of police officers and military personnel took its toll, with several collapsing on duty. Three military personnel had to be assisted by colleagues near Wellington Arch shortly before 2pm.

Farmers formed a touching guard of honor to pay tribute to the Queen as she journeyed to her final resting place. More than 30 tractors – some adorned with flowers – lined up on the A308 where the coffin traveled past the Magna Carta memorial in Runnymede. 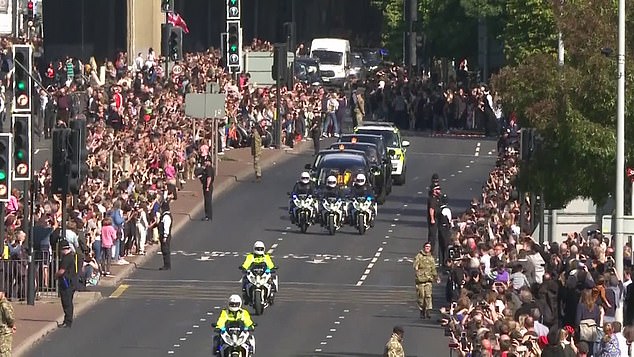 Mourners stood on bollards, railings and camping chairs and sat on each other’s shoulders to see the hearse go past

Former Windsor Major Colin Rayner said they were inspired to make the gesture after Scottish farmers formed a similar guard as the Queen left Balmoral Castle last week. Mr Rayner, 64, said: ‘We are local farmers saying goodbye to another local farmer and very good neighbor who just so happens to be Her Majesty the Queen.’

Instead of taking the motorway to Windsor Castle, the hearse followed A-roads, allowing tens of thousands of well-wishers to choose a spot along the route.

Thousands of mourners poured through Windsor and Eton to line the Long Walk up to Windsor Castle. Anne Cooper, from Aylesbury, described the atmosphere as ‘calm’.

Miss Cooper said: ‘She’s been the Queen all my life. She’s just a really big part of the country.’ 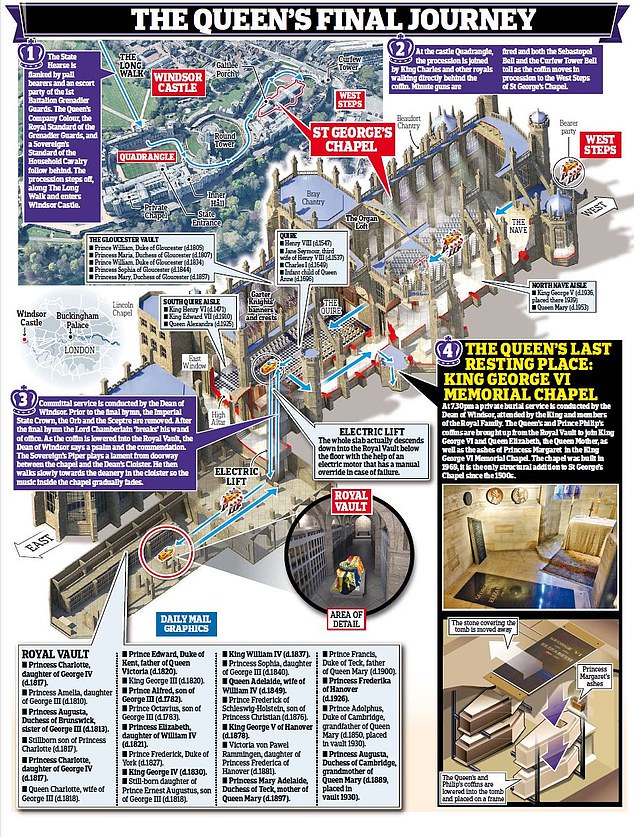