While both Mohamed Salah and Darwin Nunez etched their name on the scoresheet, the 2-2 draw at Fulham was far from the desired result and performance.

Ten weeks on from the Champions League final, Liverpool were back in competitive action and Fulham was the task ahead of them on the opening day.

One cannot assume anything in this league but three points were expected, yet they were not delivered, despite the goalscoring efforts of Salah and Nunez.

Jurgen Klopp’s side were disjointed and the manager admitted Liverpool were “just not good enough” to take all three points back to Merseyside.

Here, This Is Anfield’s Joanna Durkan (@JoannaDurkan_) is joined by Lewis Bower (@LewisBower2021), Lubo Domo (@lubodomo) and Aaron Cutler (@aaron_cutler) to talk opening day struggles, the midfield and who should start up top against Crystal Palace.

AARON: There’s no escaping the fact that it made for a poor start to the season. Having threatened to blow Man City away in the Community Shield, few supporters could have envisaged us starting so sluggishly.

The might and relentlessness of City have distorted this league beyond recognition. A draw – however early – feels like a defeat. That may sound dramatic but there is simply no margin for error. Liverpool knows that better than anyone, which made our approach all the more frustrating.

Unfortunately, too many of our lads were under par. We were second to everything and lacked any real cohesion. Continual breaks in play only exacerbated matters.

It’s rare to see the likes of Alexander-Arnold, Matip and Van Dijk so off the boil… and that’s before you get to the midfield.

LUBO: I’m not the type to criticize after one game, but the team lacked rhythm and I was also surprised by Virgil getting fooled by Mitrovic.

Fabinho was far from his best, Thiago overhit a few passes too and there was no link between midfield and attack. Salah, Diaz and Bobby barely touched the ball in the first half and Trent got beaten at the second post, not for the first time.

JOANNE: I had a different viewing experience this time around and it made for interesting viewing as my family stirred the pot and looked for any reaction.

As the only Liverpool fan in the large gathering, I was on my own and I didn’t have much to counter with as we really were so desperately poor – of which I was readily reminded.

As you said, Aaron, it’s hard to reconcile the fact that this was close to the team that was relentless against Man City only a week ago, the pressure, discipline and accuracy were just not there at Fulham.

Two points dropped. Liverpool cannot afford us saying that too many times this season.

AARON: As for positives? At least we didn’t lose.

LEWIS: Despite a wretched result and, as a whole, performance, Klopp can cast hope in the performance of Harvey Elliott. Harvey connected a disjointed midfield to a rather hopeful but subdued Salah. Incisive in his more inventive passing and careful in retention, Elliott added intensity and quality, giving life to Salah in the process.

And Nunez, he instills fear into opposition backlines. His desire and intelligence in his movement will eventually give Salah more wiggle room.

A word on that midfield performance and ANOTHER injury

LEWIS: While Thiago and Fabinho were not at their best, Henderson’s shortcomings are perhaps a little more evident to the eye in this tweaked system.

A complete lack of composure led to a number of turnovers, meaning any grip on the game would be short-lived.

AARON: The midfield trio were appealing, frankly. I lost count of the second balls lost, while none seemed capable of dictating the pace of the game… something you’ve come to expect from Thiago in particular.

And on Henderson, he improved slightly when dropped into the No. 6 roles but that’s not saying much.

JOANNE: You expected a Thiago injury at some point this season but it coming this early is a blow, but I still don’t see Klopp pushing for a new face as he will sense it is a stop-gap with those currently on the sidelines expected to return without too much delay.

Not sure I completely agree. 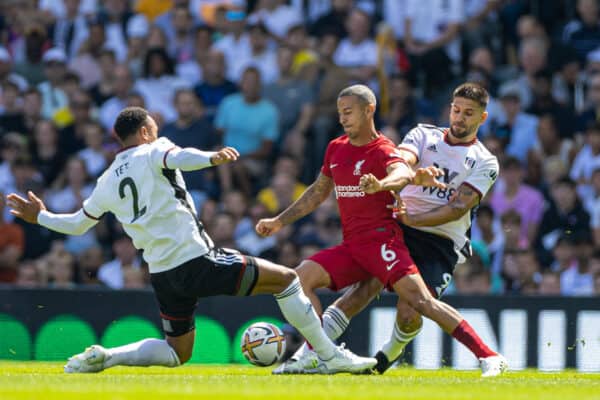 LUBO: There is enough quality in Naby, Hendo, Fabinho, Elliott, Carvalho, and Milner to get us through the injury crisis. On paper, we still have enough options. A new signing isn’t necessary as of yet, for me. I am not sure that the right player is available at the moment.

LEWIS: I sit on the other side to you, Lubo. It is probably time Liverpool dipped into the market. Although I agree with Klopp, we do not want a stop-gap. But I would like Liverpool to be more aggressive in their long-term goals. Lay some money out for Jude Bellingham.

Liverpool will probably need two midfielders in the next 18 months, so there must be someone else liked by the club.

AARON: I do fear we’ll pay the price for not re-enforcing in that engine room. The consensus seems to be that the club is waiting for their primary target, who, like Lewis said, we can only presume is Bellingham.

Refusing to compromise and move for a second or third choice has served us well in the past but let’s not forget it also threatened to derail an entire season in 2020/21.

Yes, we have options, but too many of them have checked injury records and simply cannot be relied upon. I’d be surprised if we see any one of Thiago, Jones or Chamberlain before October which should really prompt a re-think. I’d be even more surprised if we bought someone.

And Nunez or Firmino vs. Palace?

JOANNE: I adore Bobby Firmino and I thought he showed really promising signs in pre-season after looking as though all the games and injuries caught up to him last season.

I wouldn’t be surprised or disappointed to see him start at Anfield but you do feel Nunez has shown why he should be in the XI, from his movement to his goalscoring contributions.

He’s done what has been asked of him and he can create plenty of danger against Palace, and who would be opposed to seeing that?

LUBO: I agree, Joanna. As much as I love Bobby, Nunez has to start the next game. We need his presence, his strength and his positioning against this type of opposition.

Firmino will still be key, maybe they can try using him as the link between midfield and attack, the No. 10 roles, perhaps, he’s more than capable of playing there. But I expect Darwin to start and to score, again.

LEWIS: Another vote for Nunez. Darwin has more than earned his place in the starting 11. You can’t keep a £64m signing on the bench forever. Firmino himself is also not a bad option from the bench.

AARON: I’ll make it four from four! Nunez has to start, no question. His two cameo appearances have shown what a handful he’ll be for defenses.

The Uruguayan strikes me as somewhat of a rough diamond but a striker that is always going to be involved. His movement is exceptional and his physical presence is a real asset.

On the flip side, Bobby’s influence appears to be waning. He still has a role to play but that is increasingly against certain sides and/or setups. When the Reds are expected to dominate possession and be in the ascendancy, his lack of goal threat comes into sharp focus.