No sooner had UK football served notice that it would be restarting the season after its 72-hour shutdown to commemorate the death of Queen Elizabeth II than along came the first fresh postponement on Monday lunchtime.

Arsenal’s Europa League group game at home to PSV Eindhoven, scheduled for Thursday evening, would not be going ahead “due to the severe limitations on police resources” in London before the state funeral on Monday.

And, by the evening, others had followed in the Premier League.

Chelsea’s home match against Liverpool on Sunday afternoon has been called off. So has Manchester United vs Leeds United the same day, despite Old Trafford being 200 miles north of the capital.

Brighton & Hove Albion’s derby with Crystal Palace, initially postponed due to planned rail strikes that have since been scrapped following news of the Queen’s death, remains off.

Postponing last weekend’s games was through choice but this next wave is born of necessity.

With focus and numbers drawn elsewhere, there are no longer enough police officers available to ensure some of these high-profile games can safely go ahead.

“Following extensive consultation with clubs, police, local Safety Advisory Groups and other relevant authorities, there was no other option but to postpone the three fixtures,” said a Premier League statement.

These have become a unique set of circumstances for English clubs to grapple with.

It is typically a given that policing needs are met for games to be played. Kick-off times can be tweaked on police advice, but never before has a shortage of officers indefinitely postponed a fixture like this.

This, though, is an extraordinary week.

Police numbers in London are at an all-time high as the capital awaits the state funeral at Westminster Abbey on Monday. Hundreds of thousands of mourners are expected in the city to file past the Queen’s coffin during her lying in state for five days.


Old Trafford will be silent on Sunday while football is played in London (Photo: Martin Rickett/PA Images via Getty Images)

Officers from forces around the country are being drafted in to work alongside those in the city’s Metropolitan Police. It has been reported that 10,000 officers with varied skill sets will be on London’s streets every day for the next week. Rest days and annual leave have been canceled in some cases and shift patterns have been redrawn.

The Met, as London’s force is known, cannot hope to do this alone and nor, therefore, can it justify deploying a high number of officers at football grounds in the capital.

Arsenal were expecting a near-capacity crowd of 60,000 for the visit of PSV. With large numbers of traveling supporters from the Netherlands expected in that figure, the threat of disorder demanded a significant police presence. The support required will have been decided by Arsenal’s Safety Advisory Group (SAG) weeks in advance and an inability to deliver on that has left little option but to postpone.

The same applied to Chelsea’s Premier League game with Liverpool.

Chelsea were able to satisfy the authorities they could proceed with their Champions League group game at home to Red Bull Salzburg of Austria tomorrow (Wednesday) but the visit of Liverpool, another club who would also bring thousands of fans with them, was considered a higher risk fixture.

That the match was scheduled for 4.30pm on Sunday, the eve of the funeral, only heightened concerns over the practicality of it being played.

It was decided Brentford’s London derby at home to Arsenal, also on Sunday and just a few miles from Stamford Bridge, could go ahead as long as it kicked off at noon rather than the previously scheduled 2pm.

It is not just in London where problems have been encountered.

Although there have been reassurances to give the green light for Aston Villa, Nottingham Forest (both Friday), Wolverhampton Wanderers, Newcastle United (both Saturday) and Everton (Sunday) to play home games as planned over the weekend, Leeds’ visit to Manchester United has been postponed.

The last meeting of the clubs, at Elland Road in February, saw 900 West Yorkshire police officers on duty for a crowd of 36,000.

A 75,000 sellout for this reverse fixture, which was due to begin at 2pm Sunday, would be guaranteed to include 3,000 traveling supporters crossing the Pennines to Old Trafford.

Public-order officers at Greater Manchester Police (GMP) who were due to attend the game have instead been sent to London for the week.

“The club reiterates that the safety and security of our fans are paramount and, after considering all available options, we are supportive of the decision that was made in conjunction with the relevant authorities,” said a statement from Manchester United, confirming the postponement.

The decision has spread disbelief among Manchester United supporters. Season ticket holder Oli Winton, who is on the club’s fan advisory board, tweeted, “All games in London take place bar one but a game in Manchester cannot — because of policing in London”, alongside three confused emojis.

Winton questioned whether the date or kick-off time could have been brought forward to allow officers to go to London later, adding: “Really think they’ve looked for an excuse to postpone rather than looking for a solution. Not sure everyone worked together to look for one.”

It is understood that both clubs wanted the game to go ahead.

What has ultimately shaped which games can go ahead and which must be postponed is how they are classified.

Below the Premier League, the EFL has encountered few problems in resuming its season with matches across all three divisions tonight (Tuesday) because the vast majority of them are considered low-risk in terms of crowd trouble.

Some are even considered club security fixtures, where the threat of disorder is so negligible that policing is not required at the stadium.

Every Premier League game gets classified as Category A, B or C in advance of a season beginning — Category A being the lowest risk of disorder, C the highest.

Category C/ER — the ER standing for enhanced resources — is the highest classification and often covers derby games or ones such as Manchester United-Leeds where, historically, there has been trouble between rival fans. There is no definitive rule for the number of police officers required to cover a particular classification, but Category C/ER fixtures often deploy more than 500.

And therein lies the problem.

Forces up and down the country will not have their usual numbers this weekend, with hundreds reassigned to London.

Mounted police units and counter-terrorism officers, who ordinarily might be attending Category C games, have answered calls from the Metropolitan Police to meet the huge demands created by the Queen’s funeral.

“There are officers across England and Wales that are either in London or being deployed to support the Met,” Owen West, a retired chief superintendent and now a senior lecturer on policing for Edge Hill University in Lancashire, tells The Athletic.

“There’s a mixture of public-order officers and general officers heading to London for this week. And they’ll be there for as long as the Met thinks they’re needed.

“The second draw on resources is that many cities are planning to do their own commemorations for the funeral, with live streams. So you might have many hundreds of officers leaving a force to go to London and then you’ll need the numbers to attend events on your own patch, with thousands likely to turn up. 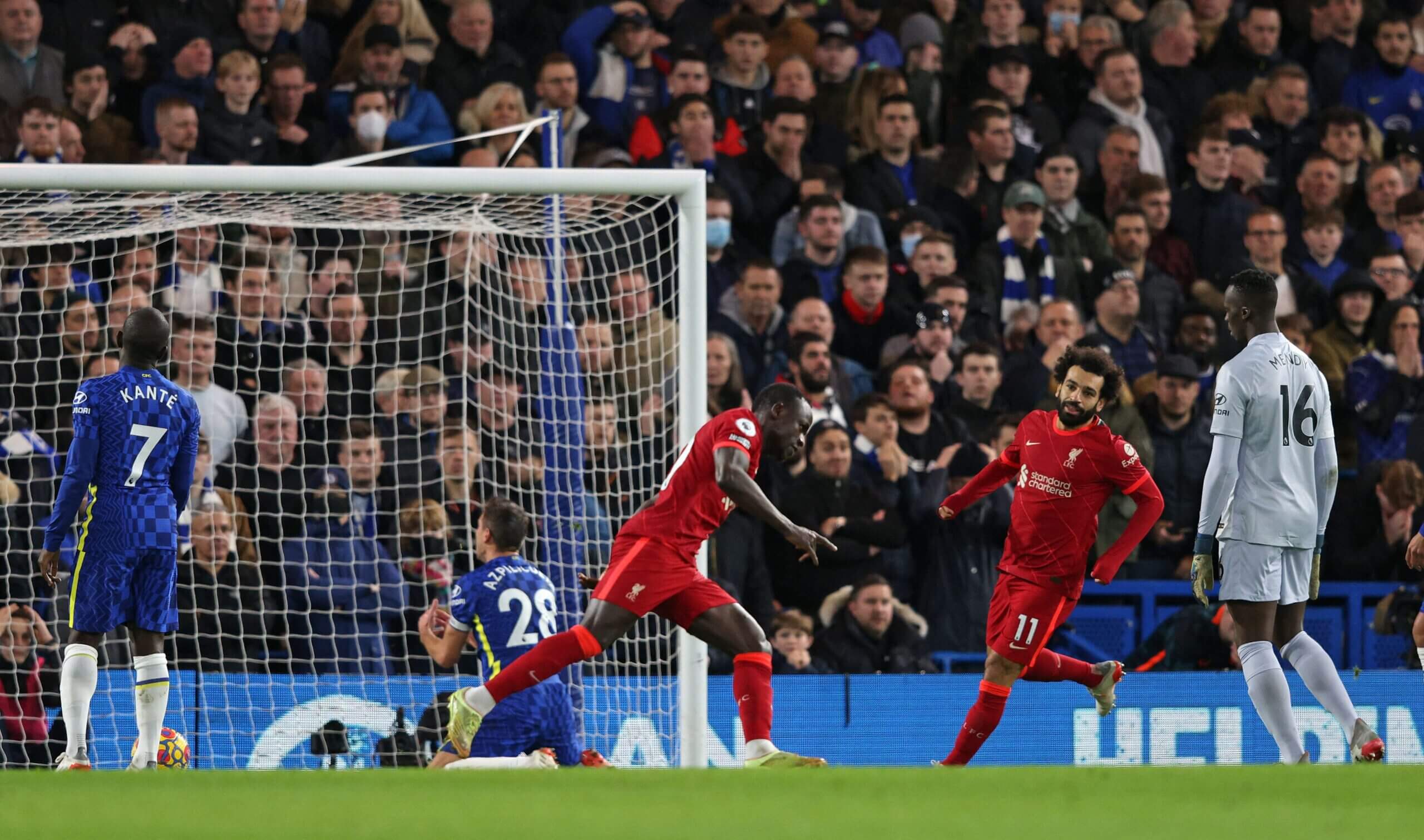 This season’s Chelsea vs Liverpool league match will have to be rescheduled (Photo: Adrian Dennis/AFP via Getty Images)

“Thirdly, these officers don’t just come out of a box somewhere. Normal policing still has to happen. You still need to have a policing capability in your area.

“Police forces up and down the country will be thinking, ‘What on earth are we going to do with high-risk football fixtures?’. It would take something pretty unprecedented for a police force to tell its clubs, ‘We can’t do this’, but those are the conversations they’ll have.”

The final decision must come from the club staging the game but, in the cases of these matches at Arsenal, Chelsea and Manchester United, it has effectively been taken out of their hands.

The Met and GMP will have relayed their problems to the relevant SAG, which are independent bodies made up of local authorities, including councils and emergency services.

“Each club has its own SAG and there is a multitude of partners that sit on that,” West says. “The police would go to the SAG with their concerns.

“It’s worth remembering that it’s only an advisory group. The club does not have to comply. But if partners around the SAG are saying to Chelsea, ‘This (match) can’t be policed’, then it makes it very difficult. I can’t remember a situation where it comes down to the crunch like this.

“There’ll be some legislation somewhere that will say if it can’t be policed ​​then it can’t go ahead. There will be all sorts of conditions for your safety certificate, with clauses and rules within it. If you can’t fulfill your safety certificate then it couldn’t go ahead because the club would be liable. You’d be in breach of legislation because people are in your stadium without everything in place.”

One potential means of satisfying a SAG would be to increase stewarding numbers, but that is a story in itself.

Football clubs, like many businesses in the events industry, have encountered shortages of stewards since the pandemic brought about a 2020-21 season played almost entirely behind closed doors. Stewarding is a part-time, casual line of work and many who had been doing it opted to pursue different challenges. Those who replaced them often lack experience.

The police also have their own internal issues.

“What you can’t separate here is the politics,” West says. “There are 21,000 fewer officers. There’s been an uplift but there’s still a significant difference. I’ve seen a statistic recently that something like 50 percent of the front line (officers) have less than three years of experience. Policing the capital will have primacy in terms of saying, ‘We need the best going down there’.

“For some time now, police officers have also been declining to take up public-order duties. They don’t have to do it. You get trained up as an extra string to your bow. But because there are fewer officers, rest days are canceled more and more often, so a lot of officers have given in their public-order tickets or just aren’t stepping forward. Officers are saying, ‘I don’t need this’, with family commitments.”

All hands have gone to the pump in London this week and football has been unable to avoid the pinch.