Israel’s security forces are on high alert near the northern border amid fears the Hezbollah terror group may attempt to carry out an attack in order to sabotage talks between Israel and Lebanon on a maritime border dispute, with the sides said to be nearing an agreement.

Israel and Lebanon have been engaged for over a year in rare US-brokered talks aimed at resolving a dispute over rights to offshore fields thought to hold riches of natural gas.

Both countries claim some 860 square kilometers (330 square miles) of the Mediterranean Sea. Lebanon also claims that the Karish gas field is in disputed territory under ongoing maritime border negotiations, while Israel says it lies within its internationally recognized economic waters.

Hezbollah, a Lebanon-based Shiite terror group backed by Iran, has vociferously opposed any concessions in the talks with Israel. Its leader, Hassan Nasrallah, has consistently threatened to target Israeli offshore installations.

In July, the IDF said it downed three Hezbollah drones launched at a gas rig in one of the disputed fields.

Israeli defense officials fear Nasrallah may be seeking to provoke Israel one more time in hopes of getting credit for any Israeli concessions before a deal is signed, Channel 12 news reported, without citing a source. The report said the two sides are close to signing an agreement.

Hezbollah terror leader Hassan Nasrallah speaks via a video link, as his supporters raise their hands, during the Shiite holy day of Ashoura, in a southern suburb of Beirut, Lebanon, August 9, 2022. (AP Photo/Hussein Malla)

Amos Yadlin, the former head of Israel’s intelligence, warned Sunday that Hezbollah was becoming overconfident in its provocations.

The terror group was at risk of overplaying its hand and sparking a conflict with Israel, similar to the buildup ahead of the last war between Israel and Hezbollah in 2006, he said.

An unnamed Lebanese official was quoted by Russia’s Sputnik news outlet on Sunday saying Beirut was still waiting for Israel’s answer to its last offer, but was optimistic there would be a deal next month.

“We are very close to reaching an agreement on the demarcation of the maritime border with Israel,” the unnamed Lebanese official was quoted by the semi-official Russian outlet as saying.

“The border demarcation issue will be concluded in September,” the source said.

US envoy to the deal Amos Hochstein said earlier this month that he was “optimistic” about the deal, and Lebanon’s foreign minister late last month said he was more bullish than ever about negotiations. 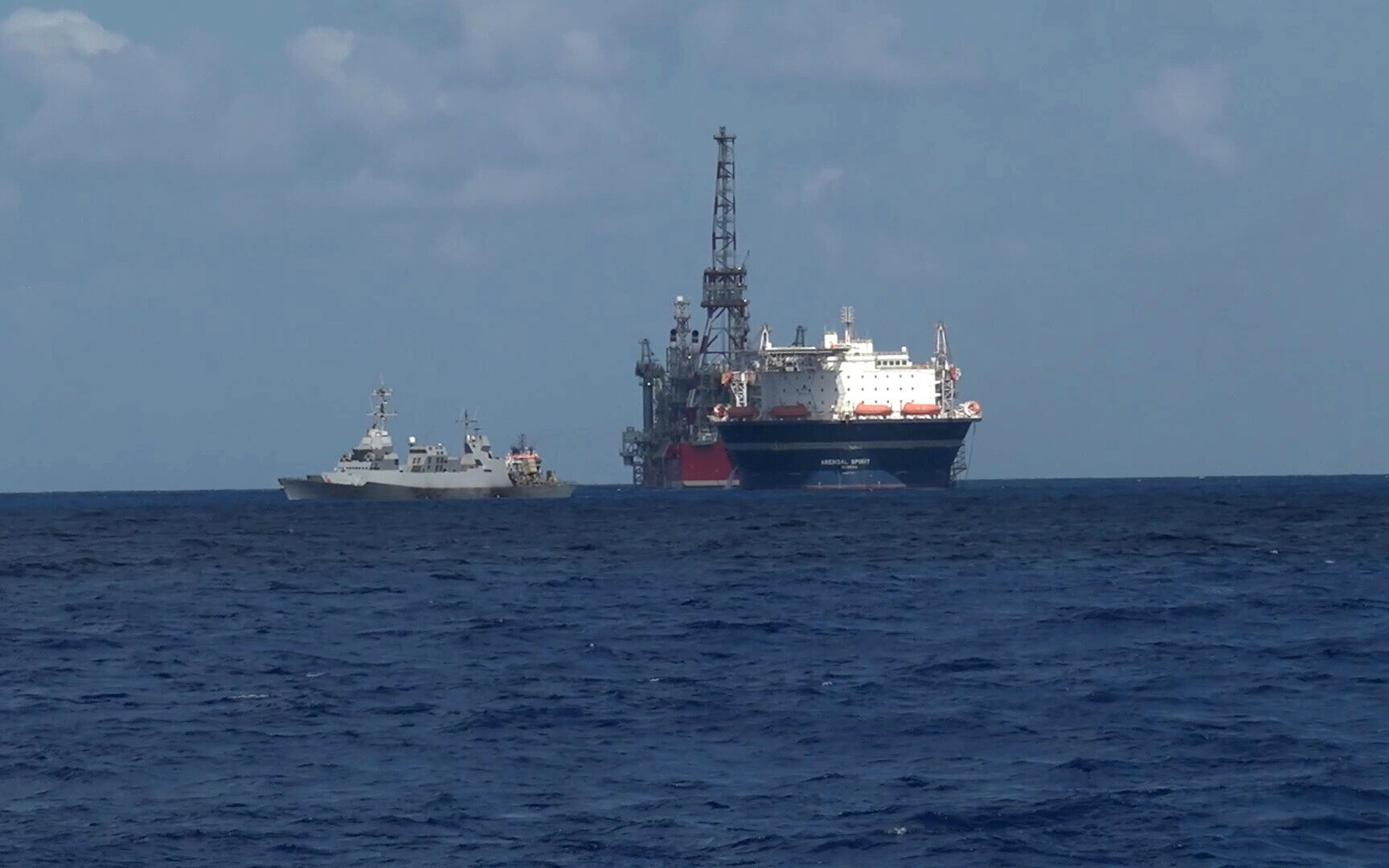 An Israeli Sa’ar Class 5 Corvette guards the Energean floating production, storage and offloading vessel at the Karish gas field, in footage published by the military on July 2, 2022. (Israel Defense Forces)

The dispute over the maritime border is more than a decade old. In 2012, Lebanon rejected an American proposal to receive 550 square kilometers (212 square miles), or almost two-thirds of the area, while Israel would have received the remaining third. The disputed area covers the Karish gas field and the Qana field.

Lebanon and Israel last fought a war in 2006, have no diplomatic relations and are separated by a UN-patrolled ceasefire line.

They resumed negotiations over their maritime frontier in 2020, but the process was stalled by Beirut’s claim that the map used by the UN in the talks needed modifying.

Lebanon badly needs an agreement over the maritime border in the Mediterranean as it hopes to exploit offshore gas reserves to try and alleviate what has become the worst economic crisis in its modern history.

Israel maintains sovereignty over the Karish gas field and has been seeking to develop the field as it tries to position itself as a natural gas supplier to Europe.

In June, Israel, Egypt, and the European Union signed a memorandum of understanding in Cairo that will see Israel export its natural gas to the bloc for the first time.

Agencies and TOI staff contributed to this report.

Sure, we’ll remove all ads from your page and you’ll unlock access to some excellent Community-only content. But your support gives you something more profound than that: the pride of joining something that really matters.