Pamela Anderson sensationally claims Sylvester Stallone offered her a ‘condo and a Porsche to be his number one girl’ in searing scenes from her documentary, Pamela, a Love Story.

The Baywatch star, 55, whose tell-all documentary will drop on Netflix on January 31, says she spurned the Rocky icon, 76, as she was looking for real love – but Stallone has branded the claims ‘false and fabricated.’

The New York Post reports Pamela says in the film: ‘He offered me a condo and a Porsche to be his No. 1 girl.

Oh my! Pamela Anderson sensationally claims Sylvester Stallone offered her a ‘condo and a Porsche to be his number one girl’ in searing scenes from her documentary, Pamela, a Love Story (pictured 2007)

She added: ‘I wanted to be in love. I didn’t want anything less than that.’

It is not clear when the alleged incident took place – she shot to fame on Baywatch in 1992 and she and Stallone happily posed up together at an event in 2007. 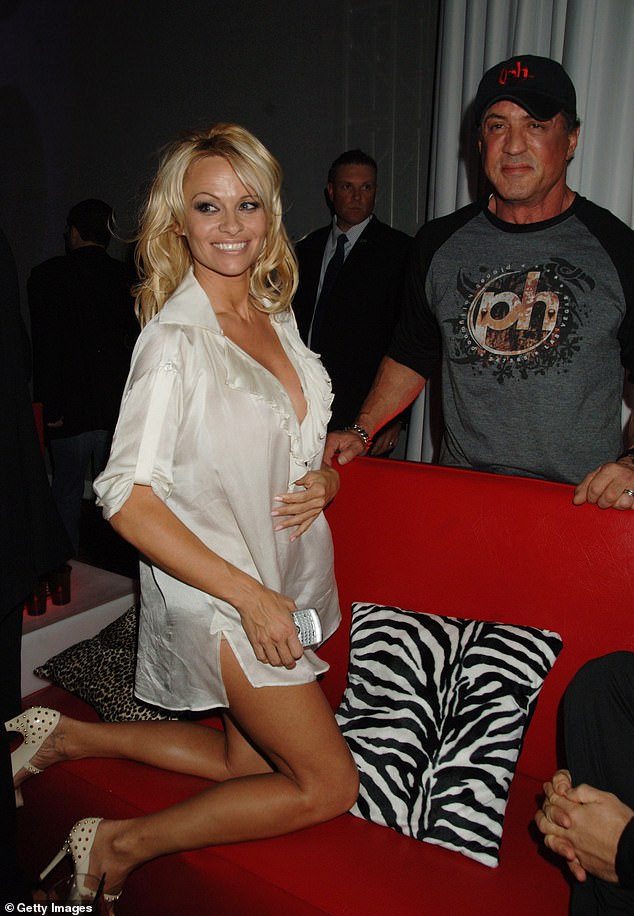 Spurned: She claims Stallone retorted: ‘That’s the best offer you’re gonna get, honey. You’re in Hollywood now’ – but the actor has denied her claims (pictured 2007)

Stallone’s representative told the publication: ‘The statement from Pamela Anderson attributed to my client is false and fabricated. Mr. Stallone confirms that he never made any part of that statement.’

Anderson has also opened up about her current relationship with ex Tommy Lee, 60, in a candid chat on Howard Stern’s SiriusXM show on Wednesday. The pair were married from 1995-1998.

She said: ‘Just a text here and there, nothing too crazy, he’s married and happy and she’s good to him and I want to support that.’

She added: ‘I hate to be annoying and go through that again and I’m sure she’s annoyed, but I respect their relationship and I’m glad he’s happy and has someone in his life.

They see each other all the time. This movie is like a love letter to their parents, they know they came from real love and they get to see the real story 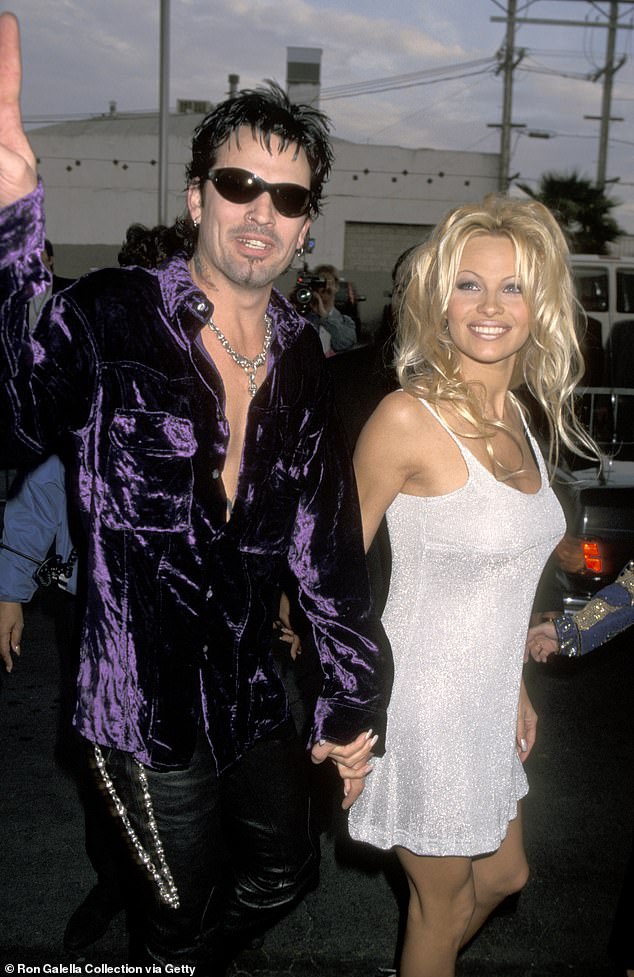 Happier times: Anderson has also been opening up about her current relationship with ex Tommy Lee, 60, in a candid chat on Howard Stern’s SiriusXM show on Wednesday (pictured 1995)

She said: ‘I remember seeing this advert for Pam & Tommy and was like, what? No-one called me, I’m still alive, no-one asked me, it’s nothing to do with me.

I felt kinda run over by that one. I don’t think they portrayed Tommy or I very accurately. I haven’t seen it but I’ve heard from people that it’s a very shallow representation of us. I wish they would have called.

I don’t think I would have wanted to be involved, especially with that subject matter, why? Why bring it all up again.

The blonde bombshell’s upcoming documentary follows her rise to fame, relationships and the sex scandal ‘in her own words,’ according to a Netflix synopsis.

According to Entertainment Tonight, Pamela explained in the film that she had ‘nightmares,’ when her sons Brandon, 26, and Dylan, 25, had informed her that a series was being made based on her and ex-husband, Tommy Lee’s, ‘ stolen tape.’

The star further admitted, ‘I have no desire to watch it. I never watched the tape, I’m never going to watch this.’

The ‘home videos’ had been stolen from a safe located in Pamela and Tommy’s garage during their marriage, and put together to create the infamous ‘sex tape,’ which caused a media frenzy. 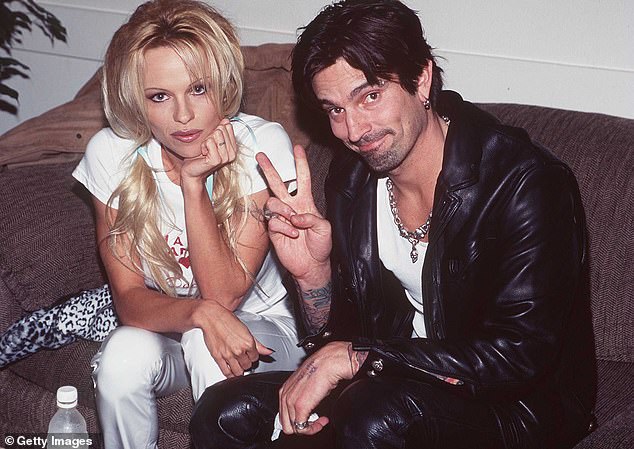 True love: She said: ‘Just a text here and there, nothing too crazy, he’s married and happy and she’s good to him and I want to support that (the former couple seen in 1997)

‘What they did is they found all the nudity they could from different Hi8 tapes, and they spliced ​​it together,’ the actress stated in the documentary.

The show followed their tumultuous relationship, along with the ‘stolen tapes.’

After the final episode aired in March 2022, the series received critical acclaim, along with garnering a total of ten Primetime Emmy nominations and four Golden Globe nominations.

However, in the Netflix documentary, Pamela reveals that she wasn’t a fan that the series was made, and her two sons, whom she shares with Tommy, also supported their mother.

‘Why bring something up from 20 years ago that you know f***ed someone up?’ Dylan, her youngest, could be seen asking in the film. ‘The worst part of her life and making a semi-comedy out of it didn’t make sense.’

Pamela continued to voice her opinion, expressing that her ‘permission’ should have been asked to create the show, adding that, ‘nobody really knows what we were going through at the time.’

When further recalling the past incident, she stated, ‘I blocked that out of my life. I had to in order to survive, really. It was a survival mechanism. And now that it’s all coming up again, I feel sick.’ 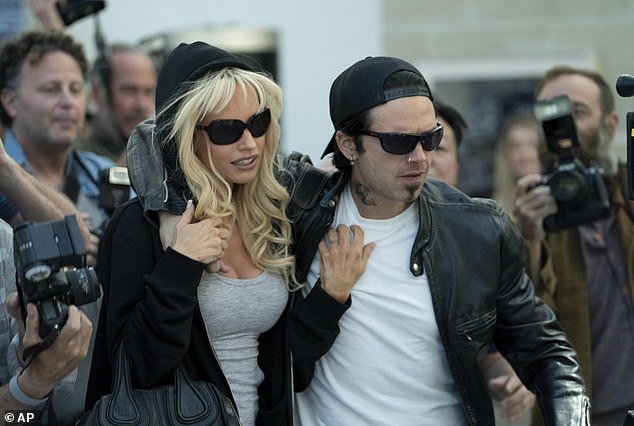 Pamela added in the documentary excerpt, ‘This feels like when the tape was stolen. Basically, you’re just a thing owned by the world, like you belong to the world.’

The former model previously announced the news of the upcoming documentary by uploading a picture on Instagram of a handwritten note with the Netflix logo at the very top, along with a lipstick kiss mark at the bottom.

The Baywatch actress wrote, ‘My life/ A thousand imperfections/ A million misperceptions/ Wicked, wild and lost/ Nothing to live up to /I can only surprise you /Not a victim, but a survivor /And alive to tell the real story ,’ followed by her signature.

In an excerpt shared by People earlier last week from her memoir, Love, Pamela, the star opened up about her marriage to Tommy, and the effect of the ‘stolen tapes.’

The blonde bombshell and Motley Crue drummer had initially tied the knot in 1995, even though the two had only known each other for a total of four days. “We just wanted to have babies and be together forever,” she wrote. 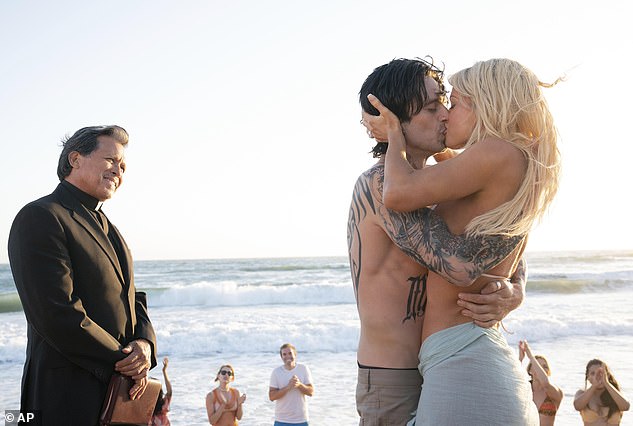 She said: ‘I felt kinda run over by that one. I don’t think they portrayed Tommy or I very accurately. I haven’t seen it but I’ve heard from people that it’s a very shallow representation of us. I wish they would’ve called’

“My relationship with Tommy may have been the only time I was ever truly in love,” Pamela added.

When talking about the sex tape scandal, she emotionally penned, ‘It ruined lives, starting with our relationship,’ adding that it was, ‘unforgivable that people, still to this day, think they can profit from such a terrible experience, let alone a crime.’

Towards the end of their marriage, Tommy had been arrested due to ‘spousal abuse’ and served six months in a Los Angeles County Jail in 1998. She recalled the incident that had made her call the police, explaining that the drummer had ‘twisted her arm’ while she was holding their son Dylan.

‘Tommy ripped Brandon off me and threw me and Dylan into a wall,’ she penned in the memoir, adding that, ‘Our hell began.’

Later that same year, their divorce was finalized, which Pamela wrote, ‘was the hardest, lowest, most difficult point of my life. I was crushed. I still couldn’t believe that the person I loved the most was capable of what had happened that night.’

The star added that, ‘We were both devastated, but I had to protect my babies,’ and despite their past, they still, ‘check in, every once in a while,’ with each other. 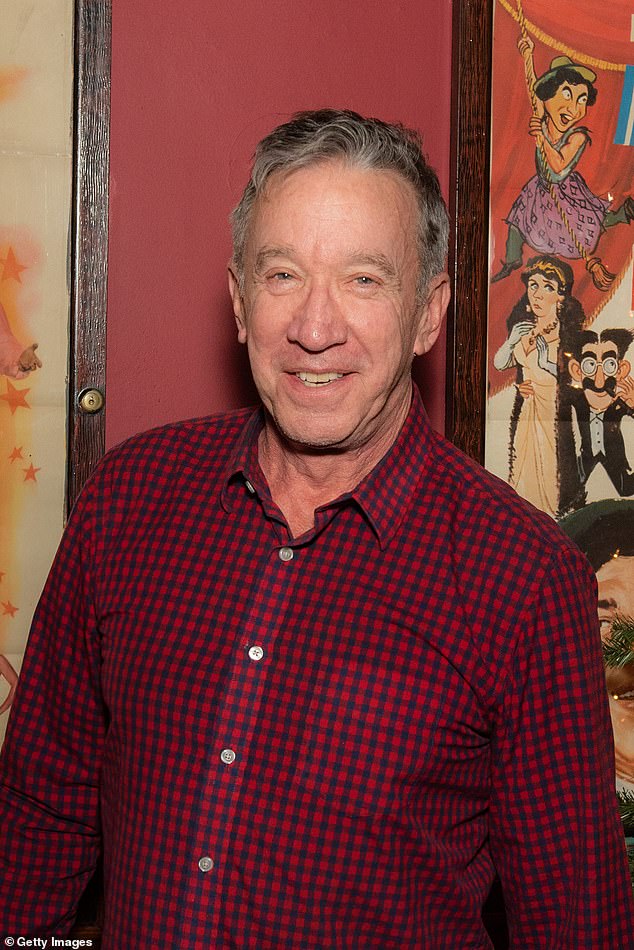 Claims: In another excerpt shared by Variety, Pamela made claims that actor Tim Allen flashed his genitals to her more than 30 years ago; the actor seen in December 2022 in West Hollywood

In another excerpt shared by Variety, Pamela made claims that actor Tim Allen flashed his genitals to her more than 30 years ago.

‘I would never do such a thing,’ Allen, 69, told the outlet earlier Sunday, saying that the incident Anderson described ‘never happened.’

The actress claimed that the incident occurred on the set of Home Improvement in 1991 when she was 23-years-old and he was 37. ‘On the first day of filming, I walked out of my dressing room, and Tim was in the hallway in his robe,’ said Anderson, who played the role of Lisa on the ABC sitcom, which starred Allen as Tim Taylor.

She continued, ‘He opened his robe and flashed me quickly – completely naked underneath.’

Anderson, who had previously posed for Playboy magazine, continued to describe the circumstances of the encounter: ‘He said it was only fair, because he had seen me naked. Now we’re even. I laughed uncomfortably.’ 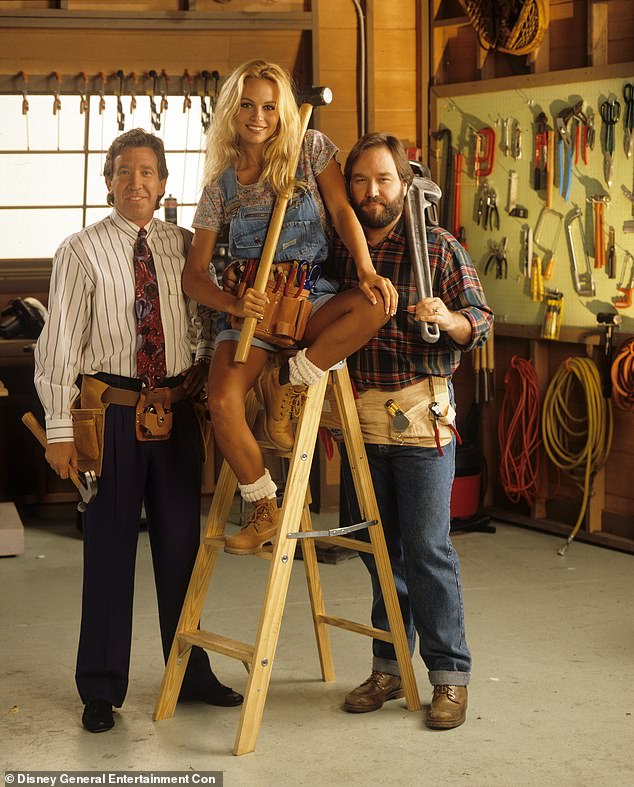 Striking down: ‘I would never do such a thing,’ Allen, 69, told the outlet earlier Sunday, saying that the incident Anderson described ‘never happened’; Tim and Pamela seen on the set of Home Improvement in 1992