The Mexican, who had been decidedly off the pace on Friday, returned to Spa and led the way over defending champion Max Verstappen, while Carlos Sainz headed up the Scuderia charge in third.

The Aston Martins were the first cars to hit the track, both drivers donning a set of medium tires to lead out Lewis Hamilton and Sergio Perez – the pair taking on the red-walled soft Pirellis.

Hamilton was the first to complete a lap but circulated seven seconds off the eventual pace to leave the Alfa Romeo double act as the first to post anything like a representative lap time.

After seven minutes of the hour, using a fresh set of C4 softs, Zhou Guanyu propelled himself to the top of the leaderboard courtesy of a 1m47.795s effort.

That placed him a little over a tenth faster than his teammate Valtteri Bottas. The Finn was the fastest driver of all through sectors one and two but lost out in the final part of the lap.

Regardless, the Alfas were initially clear by 2.2s after 10 minutes – helped by Verstappen locking the front-right into La Source before complaining of all-round tire overheating.

After 10 minutes, only the Ferrari and Haas cars had yet to emerge – the Scuderia likely working to save a set of tires after an ill-fated strategy that bet on hards in Hungary.

With Hamilton struggling in ninth after a massive bout of oversteer through the Bus Stop chicane, before Daniel Ricciardo did the same, the Aston Martins charged to third and fourth, led by Lance Stroll.

Kevin Magnussen finally emerged after 21 minutes, the Dane suffering an electrical shutdown in FP1, but as he came out the other Haas was called back to the pits – the team having spotted an issue for Mick Schumacher after only six laps of running.

But Magnussen was straight into the groove, running third on a set of softs to lap just two tenths shy of Zhou thanks to the fastest run of anyone through S2 at that time.

It would be another four minutes before the Ferraris finally hit the track, with Sainz soon moving to the top of the charts thanks to his 1m46.461s qualifying simulation on softs.

Leclerc was four tenths slower than his teammate after the first go, the Monegasque set for a hefty grid penalty for engine and gearbox changes along with Lando Norris, Schumacher, Zhou and Verstappen.

Red Bull responded as Perez turned in a 1m45.972s to run half a second quicker but Verstappen would remain only 12th after locking up into the Bus Stop chicane.

He then backed off completely under instruction, having supposedly missed a yellow flag for the AlphaTauri of Pierre Gasly running wide through Blanchimont.

The defending champion would be investigated for this but was cleared before the end of the session.
This interruption prompted Verstappen to run again, having set the fastest time of anyone through the second sector – the twisty run from Les Combes to Stavelot.

So, with 20 minutes to go, Verstappen stitched together an improved run to move fastest over his teammate by 0.5s and a full 1s ahead of Sainz as the Red Bull RB18s came to the fore. 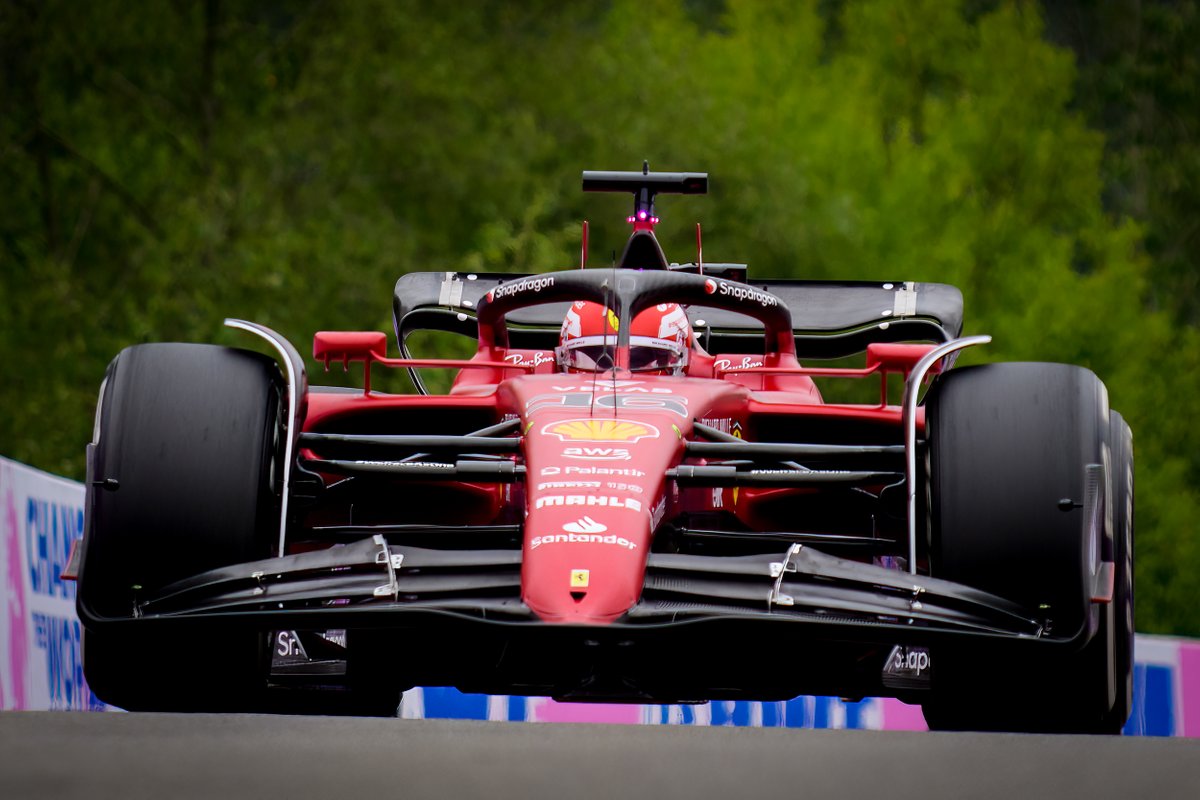 Ferrari’s retaliation was then ruined by Leclerc crashing to bring out a red flag. His F1-75 snapped on the turn into Les Fagnes and he spun across the gravel to nudge into the outside tire wall – although he seemed to escape without obvious damage.

Despite Leclerc resuming shortly after, the red flag was called into action very quickly to bring about a three-minute halt.

When the session resumed for a final shootout, Verstappen improved down to a 1m45.184s over the line thanks to his work in sectors two and three.

But Perez’s superior last-ditch run through the first part of the lap meant he took the FP3 bragging rights on a 1m45.047s to lead the way by a tenth over Sainz.

Norris ended up fourth ahead of Fernando Alonso, while Mercedes’ best return was George Russell in sixth as Leclerc was limited to seventh.

Behind Sebastian Vettel in eighth – the AMR22 slowing on the cooldown lap with the powertrain cycled into limp mode before restarting – Esteban Ocon ran to ninth.

However, the Alpine racer complained that Sainz had held him up through Eau Rouge to ruin an improved lap.

Gasly clocked 10th ahead of Ricciardo, Hamilton and the two low-downforce Williams – Nicholas Latifi pipping Alex Albon with the fastest run of the session through the high-speed first sector.