Russia on Monday night fired back at Israel for its condemnation of Moscow’s attacks on Ukrainian cities, saying Jerusalem had failed to do the same for Kyiv’s “terrorist attacks on civilians of Donbass” and numerous “murderous” actions.

The statement by Russia’s embassy in Israel came hours after Prime Minister Yair Lapid voiced his “strong” denunciation of the barrage of fatal bombings across Ukraine.

The Israeli leader said these targeted “the civilian population in Kyiv and other cities across Ukraine.”

In its comments, the embassy asserted that its attacks were “a high-precision strike on the facilities of military control, communications and energy systems of Ukraine.

“It’s worth noticing, that, unfortunately, Israel chose to stand silent during eight years of ongoing Ukrainian terrorist attacks on civilians of Donbass, to turn a blind eye to the recent murderous Ukrainian attack on a refugee convoy in the Kharkov region, monstrous murders of civilians by Neo-Nazi Azovs in Kupyansk and other Ukrainian cities, [the] vicious murder of a Russian journalist Darya Dugina, [the] recent Ukrainian terror attack on the Crimean Bridge as well as other numerous horrific and unpunished crimes of the Kyiv regime.”

The biggest wave of strikes across Ukraine in months killed at least 11 and wounded more than 80 in retaliation for an explosion this weekend that damaged a key bridge linking Russia to the Moscow-annexed Crimean peninsula.

A medical worker runs past a burning car after a Russian attack in Kyiv, Ukraine, Monday, Oct. 10, 2022 (AP Photo/Roman Hrytsyna)

Israel has sought to avoid aligning too closely with either side since the conflict began on February 24. It is one of the few countries that maintains relatively warm relations with both Ukraine, a fellow Western democracy, as well as Russia, which controls the airspace over Syria in which Israel operates to target Iranian proxies.

Still, it has offered strong criticism of Moscow on several occasions, and recently rejected Russia’s annexation of occupied Ukrainian territories.

Kyiv said Russian forces had fired more than 80 missiles on cities across the country and that Russia had also used Iranian drones launched from neighboring Belarus, spurring panic and damaging energy facilities throughout Ukraine.

But Ukraine’s foreign minister Dmytro Kuleba said the salvo showed Moscow was increasingly panicked about recent battlefield losses seven months into its invasion. Kuleba said the attacks had not been “provoked” and that the onslaught was Moscow’s response to a series of embarrassing military losses in eastern Ukraine. 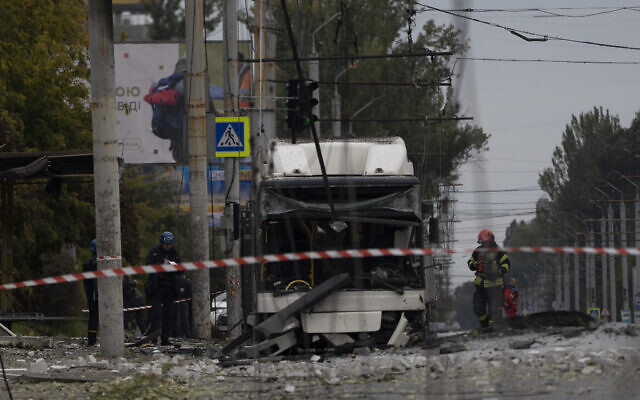 Firefighters and police officers work on a site where an explosion damaged a bus after a Russian attack in Dnipro, Ukraine, Monday, Oct. 10, 2022. (AP Photo/Leo Correa)

“Putin is desperate because of battlefield defeats and uses missile terror to try to change the pace of war in his favor,” Kuleba wrote on social media.

And President Volodymyr Zelensky said his country will not be “intimidated” by such strikes.

“Ukraine cannot be intimidated. It can only be more united. Ukraine cannot be stopped,” Zelensky said in a video shared on social media. He also promised to make the “battlefield even more painful” for Russian troops.

Zelensky said he had spoken with the leaders of France and Germany and urged them to “increase pressure” on Russia. 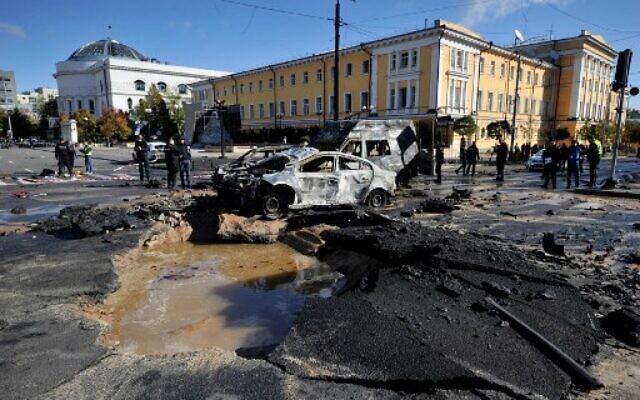 Police experts examine destroyed cars in the center of the Ukrainian capital of Kyiv after several Russian strikes on October 10, 2022, (SERGEI CHUZAVKOV/AFP)

US Secretary of State Antony Blinken weighed in on Twitter, writing: “We will continue to provide unwavering economic, humanitarian and security assistance so Ukraine can defend itself and take care of its people.”

UK Foreign Secretary James Cleverly said the Russian missile strikes on the Ukrainian capital, Kyiv, and other cities were “unacceptable.”

“This is a demonstration of weakness by Putin, not strength,” he tweeted, adding that he had contacted Kuleba.

In Kyiv, the national police service said that at least 11 people had been killed and at least another 64 wounded.

Ukrainian officials said the central Shevchenko district of the city was hit and that a university, museums and the philharmonic building had been damaged.

In the wooded Taras Shevchenko park in central Kyiv, a missile gouged out a huge crater next to a children’s playground after going under the air above it.

In the western city of Lviv, Mayor Andriy Sadovyi said there were disruptions to electricity and hot water services after bombings that targeted critical infrastructure, including energy facilities. 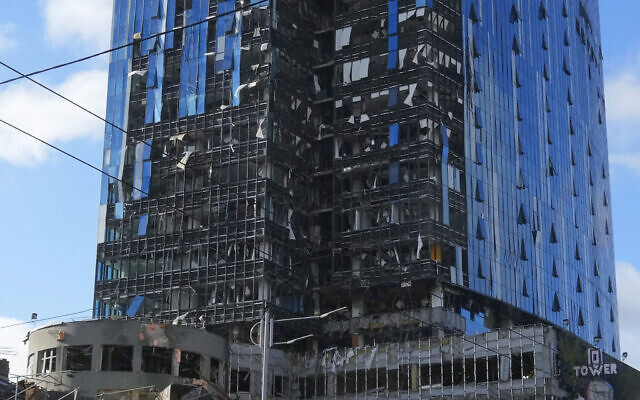 Israeli elections are coming around yet again — this time on November 1. How did the electoral system become so dysfunctional, and what could resolve the repeated deadlocks?

The Times of Israel is proud to present a new, limited series podcast, Paralyzed Nation: How Israel’s Dysfunctional Electoral System Can Still Be Fixed. Our political analysts and reporters address your questions on the burning issues facing the Israeli electorate today.

Available for ToI Community members only.