Fighting between Israel and the Palestinian Islamic Jihad (PIJ) terror group in the Gaza Strip continued Saturday for a second day, with numerous Israeli strikes on the Strip and hundreds of rocket launches at Israeli communities.

By Saturday evening, Israeli officials said over 350 rockets had been launched from the Palestinian enclave. And for the first time in the current conflict, rocket sirens sounded in the central metropolis of Tel Aviv. Two incoming rockets were intercepted by the Iron Dome missile defense system and another two fell into the sea.

The vast majority of rockets did not endanger Israeli communities, but a few hit towns, causing damage but no casualties. One hit a street in Ashkelon damaging nearby cars; a second hit a home in Sderot as the family hid in a reinforced room; a third hit the premises of a Sderot factory; and a fourth hit a factory in an undisclosed town close to the border.

As Israeli airstrikes continued on PIJ sites in the Strip, the chief of the military’s Gaza Division told Channel 12 news that there were still “many” more targets to hit.

The military launched the operation with airstrikes in Gaza on Friday afternoon in response to what officials said was an ongoing “concrete” threat by PIJ to target Israeli civilians and soldiers. Islamic Jihad then began to fire relentless barrages of rockets at Israeli communities in southern and central Israel, with the rocket fire continuing into Saturday night.

The latest Israel Defense Forces data put the number of rockets launched towards Israel at 350. Of them, 94 fell short in the Gaza Strip and another 29 fell into the Mediterranean Sea.

A rocket landed outside a factory in Sderot. No injuries. pic.twitter.com/yVrFR443fR

The Iron Dome air defense system intercepted 162 projectiles, according to the data. The military said Iron Dome demonstrated a 95.9 percent success rate at intercepting projectiles fired toward populated areas. The system is programmed to ignore rockets that are not considered a threat.

A rocket strike in the southern city of Ashkelon after a barrage launched toward Israel by a Gaza terror group, August 6, 2022. (Yonatan Sindel/Flash90)

Three people, including two soldiers, were also slightly hurt in a separate mortar bombardment near a town in the Eshkol Regional Council.

The Magen David Adom ambulance service said it had evacuated 21 people to hospitals since the beginning of fighting, including two people who were slightly hurt by rocket shrapnel, 13 after falling while running to shelter, and six for anxiety.

Military chief Aviv Kohavi said Israel would target the PIJ in the Gaza Strip, West Bank and elsewhere. During a visit to the Southern Command, Kohavi said the IDF had two main goals. “One is to prevent all attacks, and two, to critically hit the Islamic Jihad organization, here, in Judea and Samaria, and all other sectors,” he said. 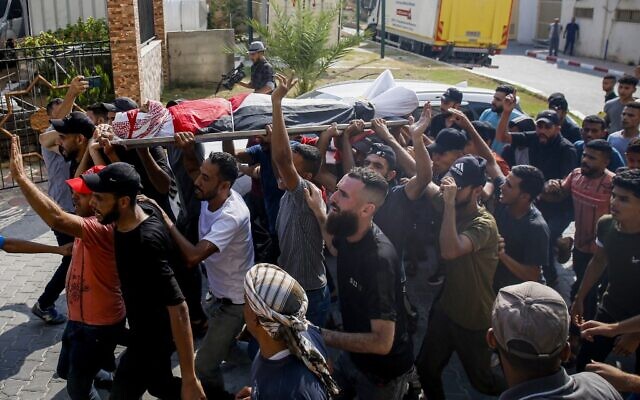 People carry the body of Palestinian Hassan Mansour, who was killed in an Israeli air strike, during his funeral in Beit Hanun in the northern Gaza Strip on August 6, 2022. (Anas Baba/AFP)

“We will not allow any organization in any arena to harm the sovereignty of the State of Israel,” he said.

Defense Minister Benny Gantz issued a similar threat to the leaders of the PIJ, who operate mostly from other countries hostile to Israel. “The leadership of Islamic Jihad, who sit abroad in restaurants and stay in hotels in Tehran, Syria, and Lebanon, are disconnected from their people,” he said during a tour of an Iron Dome air defense battery in southern Israel.

He said they were “seriously harming” the livelihoods of Gaza residents amid the current escalation of violence, and that they would “also pay the bill.”

Earlier Saturday, the IDF said it was prepared for a potential week of fighting against the PIJ, and later announced that it had struck numerous observation posts and weapon storage sites belonging to the terror group across the Gaza Strip.

The Hamas-run health ministry has said at least 15 people have been killed in Israeli strikes, including a five-year-old girl, and 125 others wounded. 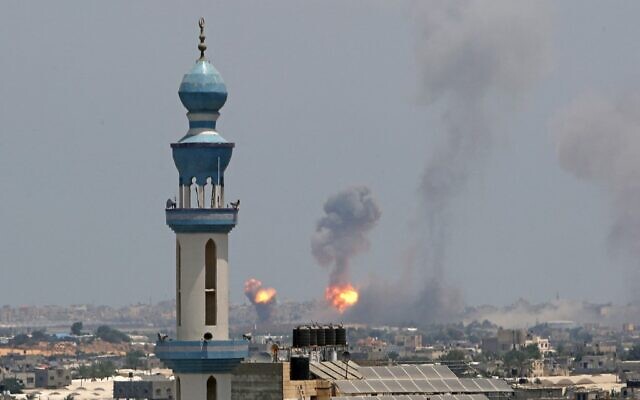 Smoke billows from an Israeli air strike in Khan Ymunis in the southern Gaza Strip on August 6, 2022. (AFP)

In the opening round of Israeli strikes, the military killed one of PIJ’s senior commanders, Tayseer Jabari, whom officials said was planning to attack Israeli civilians near the border. Jabari replaced Baha Abu al-Ata as the group’s commander in northern Gaza after the latter was killed in an Israeli strike in 2019.

Israeli leaders said the airstrikes were necessary after the group refused to back down from its intentions to carry out attacks on the Gaza border. Along with Jabari, the IDF also said it targeted the head of PIJ’s anti-tank guided missile array and several squads preparing attacks.

Islamic Jihad had been threatening since Tuesday to attack — to reinforce its demand that Israel release its West Bank commander, Bassem Saadi, who was arrested in an IDF raid in Jenin on Monday — causing days of road closures and community lockdowns in areas near the Gaza border under immediate threat.

Egypt meanwhile has been trying to mediate between the sides in recent days, but failed to convince Islamic Jihad to back down. Egyptian negotiators on Saturday proposed a pause in hostilities to create an opportunity for a longer-lasting ceasefire to be negotiated. 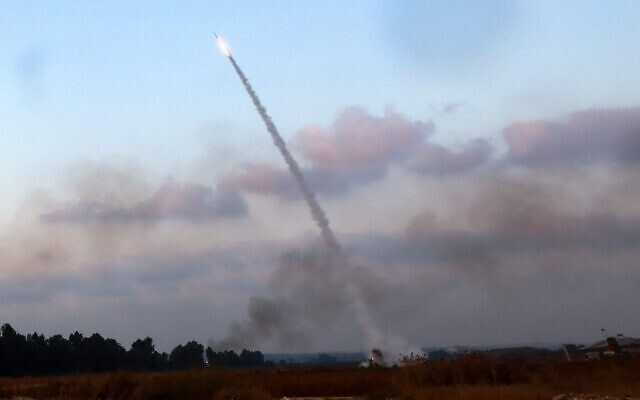 A missile from Israel’s Iron Dome air defense system is launched from the outskirts of the southern Israeli city of Sderot, on August 6, 2022. (Jack Guez/AFP)

The PIJ rejected the proposal for a temporary ceasefire, the Hezbollah-affiliated Al-Mayadeen TV reported. “Now is the time to respond to the crimes of the occupation,” a PIJ source told the network.

Israeli officials said that the Gaza operation was targeting PIJ specifically, hoping to keep Hamas largely out of the conflict as it did during a 2019 flare-up after the killing of a previous Islamic Jihad leader, Abu al-Ata.

As of Saturday night, Hamas appeared to be staying out of the fight for the time being. Although its leaders’ statements included voiced fiery rhetoric against Israel, it has so far avoided taking part in attacks. 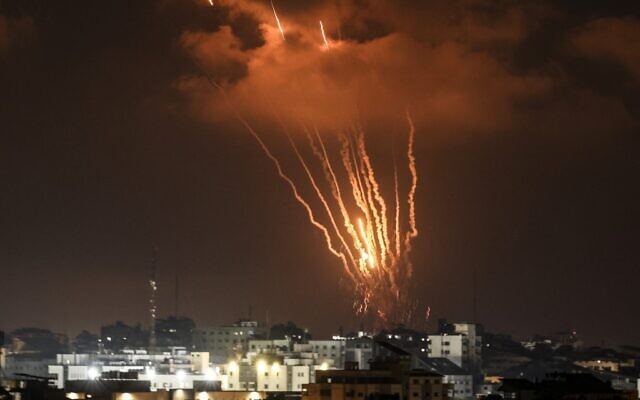 The IDF has begun to call up reservists to bolster its Southern Command, Home Front Command, air defense array and combat troops in the event of further escalation. Gantz approved calling up as many as 25,000 reservist troops, his office said.