The US said Monday it is still seeking the extradition of a Palestinian woman in Jordan convicted of helping a suicide bomber in Jerusalem in 2001, but declined to comment on a request from the family of one of the victims for a meeting with President Joe Biden.

The family of Malki Roth, an Israeli-American girl killed in the attack, have asked for a meeting with Biden when he visits Israel later this week. They want him to press Jordan, a close American ally, to send Ahlam Tamimi to the US for trial.

“We ask that you address this as only the leader of the United States can,” Frimet and Arnold Roth, the parents of Malki Roth, who was 15 when she was killed in the attack, wrote in a letter. “We are bereaved parents as you are, sir. We have a burning sense that injustice in the wake of our child’s murder is winning.”

The Roths have been waging a campaign for the extradition of Tamimi since she was released by Israel in a 2011 prisoner swap with the Hamas terrorist group and sent to her native Jordan, where she lives freely and has been a familiar face in the media.

“The US government continues to seek her extradition and the Government of Jordan’s assistance in bringing her to justice for her role in the heinous attack,” the US National Security Council said Monday.

On August 9, 2001, a Palestinian bomber walked into a Jerusalem pizzeria and blew himself up, killing 15 people. Two American citizens, including Roth, were among the dead.

Tamimi, who chose the target and guided the bomber there, was arrested weeks later and sentenced by Israel to 16 life sentences. Since her release, she has expressed no remorse and has boasted that she was pleased with the high death toll.

In a 2017 interview with The Associated Press, she said the Palestinians have a right to resist Israel by any means, including deadly attacks.

The Roths have repeatedly called on US authorities to press Jordan, which has received billions of dollars in American assistance, to turn over Tamimi for trial.

The United States has charged Tamimi with conspiring to use a weapon of mass destruction against American nationals. The charge was filed under seal in 2013 and announced by the Justice Department four years later. Her name was added to the FBI’s list of Most Wanted Terrorists.

The US and Jordan signed an extradition treaty in 1995. But in 2017, Jordan’s high court blocked her extradition, reportedly claiming the treaty was never ratified.

Two years ago, the Trump administration said it was considering withholding aid to Jordan over the case, but ultimately no action was taken. 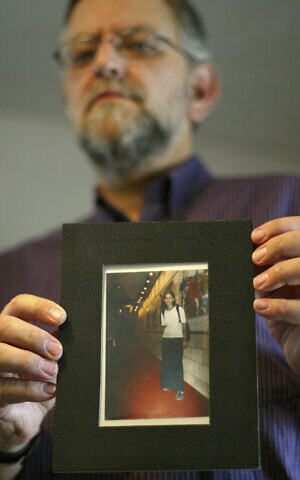 Arnold Roth holds a photo of his 15-year-old daughter Malki, who was killed in an August 2001 Palestinian suicide bombing at a Jerusalem pizzeria, at his house in Jerusalem, on Sept. 28, 2004. (AP Photo/Oded Balilty)

Jordan is one of the United States’ closest partners in the Arab world, seen as a force of moderation and stability in the volatile Middle East. American officials appear to be wary of sparking a diplomatic crisis with a key ally.

“Something is obviously terribly wrong with how the pursuit of America’s most wanted female fugitive is going,” the Roths wrote in their letter, sent to Biden through the US Embassy.

“We want to explain this to you better in a face-to-face meeting,” they added. “We want you to look us in the eyes, Mr. President, and tell us how Jordan’s king can be a praiseworthy ally.”

Biden is scheduled to land in Israel on Wednesday before traveling to a Mideast summit in Saudi Arabia on Friday. He has no plans to be in Jordan, although Jordanian officials are expected at the summit.

There was no immediate comment from the Jordanian Royal Hashemite Court on the Roth family letter.

In March, Interpol dropped an international warrant for Tamimi.

Times of Israel staff contributed to this report.

Israeli cooking is taking the world by storm. Here’s your chance to join in…

The Times of Israel Community is excited to present our new virtual cooking series, B’Teavonwhere world renowned chefs show you how to make classic and modern Israeli dishes.

Learn more Learn more Already a member? Sign in to stop seeing this